This new creature, with its organs, circulating blood, all of its interior life, still undulating with its oceanic origins, muscles itself on land. But always, though it all, no matter what, its internalized fluid resonance continues to carry the message of the star-seasoned sea. Emilie Conrad, the founder of Continuum, a somatic movement art based on the liquid choreography of pure being. 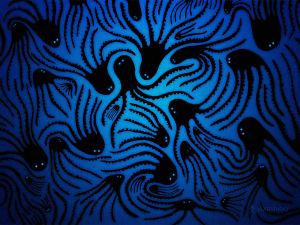 What is yoga’s origin? Its purpose? Most agree yoga’s origin is hazy, created by ancient yogis and yoginis high in the Himalayas in order to align their nadis and increase their prana in order to get to yoga’s fundamental purpose, undifferentiated pure being. It’s queer that this rather conceptual story of yoga’s origins is missing while the non conceptual purpose of yoga is endlessly conceptualized and expanded upon. In post modern yoga, writings on merely conceptual matters like alignment, style, and health benefits threaten to cast a shadow over even the voluminous writings on enlightenment.

What if yoga’s origins are more ancient than we have ever imagined? What if these origins contain wisdom and compassion that is far more accessible than non conceptual enlightenment but with all its beauty and majesty? That would be golden! Although Indo/Himalayan sadhus have greatly contributed to codifying and transfiguring yoga into its recognizable forms of today, much of the original choreography was lost. Specifically what was lost was the bio-intelligence that created the poses. The original choreographer’s movements arose from the play of bio-intelligence. The legacy of bio-intelligence is aquatic in origin and the movement’s magic is manifested by our bodies innate abilities to gestate, develop, and heal. It is through liquid movement that these miracles of non-conceptual life occur and coincidentally, where yoga asanas emerged as well.

Emilie Conrad states that when liquid choreography is practiced over time, bound form is lessened and we return ourselves to undulating movement, which is primarily what we are. A receptive individual’s bio-intelligence will spontaneously create primordial yoga asanas during open and improvised fluid movements. These early supine asanas all evolved from the open attending to subtle fluid movement in savasana. From savasana, fluid movement creates other supine and prone asanas including supine twists and even low to the ground inverted poses like setu bandha. These postures predate hatha yoga, bipedalism, and even predates humankind as we know it. Aquatic yoga arose not as fixed asana poses but movement. Poses were eventually picked as arbitrary stopping points from within fluid movements.

To be brief, in fluid environments, the functions of the body followed movement. Unimpeded, undifferentiated movement is a blessing in an aquatic environment but is not efficient on land. As human beings moved towards land, movements began to follow functions. The weightlessness of an aquatic environment creates a fluid freedom of not only movement, but fluid molecules expanding within the body. Over eons, life on land has drastically decreased human beings repertoire of movement and cellular expansion. We tend to be utilitarian in or movements in order to accomplish more functions. utilitarian movement, which is primarily sequential, requires that fluid molecules organize themselves in a somewhat compressed manner. Yoga is so powerful because it starts to address this life long cellular compression and the grosser and grosser levels of personally and collectively compressed movement.

Contemporary yoga is an expansion of a Westernized individual and cultural anatomy that is linear, compressed, and pushed forward. But this expanded, less compressed modality still reflects the utilitarian world more than the aquatic world. Yoga is primarily sequential and is presented with alignment rules that reenforce very specific and patterned movement. This patterned movement becomes a closed system that will degenerate over time while compressing the fluid molecules along particular pathways. Compressing = No New Information = Stagnating. Movement = New Information = Life. I’m reminded of the “silence = death” t-shirts of the Act-Up era that I never liked. One day my friend Deke wore a “thought = change” t-shirt and I thought that was so right on. I never saw that shirt worn by anyone else. Why was one shirt wildly popular and the other one a dud? The slogan “silence equals death” reflects the gestalt of cellularly compressed bodies lacking information. Which brings me back to the duddy concept of liquid choreography. Duddy because it is a leap too far away from normality, even for yoga practitioners. Liquid choreography is attending to the fluid presence in our bodies to move ourselves from the inside out, circularly, spirally, and organically. Think how many ways an octopus moves in water, how many animals it can imitate, how many ways it can hide itself and escape. I once read that octopuses are the most delicious tasting animal in the sea and almost every largish oceanic creature is trying to eat them. To survive they must me masters of undifferentiated movement and merge fluid movement with fluid itself. Embodied shapeshifters. One final thought, the fluid presence in our bodies is our fundamental environment. We are the moving water brought to land the movement of fluid functions as a primary healer-innovator with an intelligence we cannot fathom.